David Wheeler to Speak at the 2021 Conference on Climate Change: Impacts & Responses 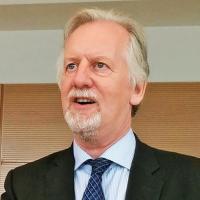 We are delighted to announce that David Wheeler will be speaking at the Thirteenth International Conference on Climate Change: Impacts & Responses.

David is an internationally experienced academic with three decades of senior executive level involvement in change management and sustainable business practice, research and teaching. Throughout his career David has been requested to provide support to senior management teams in pursuing strategic and sectoral change. His most recent academic posts were President and Vice-Chancellor of Cape Breton University (2013-2016), Pro Vice-Chancellor (Sustainability) and Executive Dean of Business at the University of Plymouth, UK (2010-2013), Dean of Management, Dalhousie University, Canada (2006-2009) and Director and Erivan K Haub Professor in Business and Sustainability at the Schulich School of Business, York University, Canada (1999-2006). He has published more than eighty peer reviewed articles in a range of disciplines, including in the Lancet, the British Medical Journal, Energy Policy, the Sloan Management Review, and Long Range Planning. During his career David has advised numerous UN and other international agencies, governments, corporations, civil society organisations and universities. He is a member of the CSR Advisory Council for Export Development Canada and the Environment and Social Advisory Council for the European Bank for Reconstruction and Development and is currently strategic advisor on sustainability to Mohawk College and Principal at Sustainable Transitions, a values-based advisory services organization headquartered in Costa Rica. During his career David oversaw the setting up of two energy efficiency agencies, a World Health Organisation Collaborating Centre and several university-based sustainability institutes. He delivered the world’s first carbon-neutral university in 2016 and was the principal designer of Brampton University, a proposed new university serving Canada’s 9th largest municipality.

Submit your proposal to the 2021 conference here.