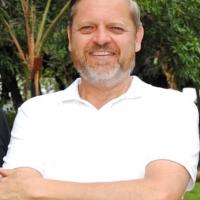 Hennie is a Culinary Arts lecturer in the Department of Consumer and Food Sciences of the Faculty of Natural and Agricultural Sciences at the University of Pretoria. He holds a PhD in Food Management for which he developed and validated a Food Literacy Measurement Instrument using Rasch Modelling. Other research involves Cultural Food such as the Chikanda of Zambia, Sensory Research regarding Mogodu (a local tripe dish) as well as collaborative work in areas of Food Waste, and modernising Culinary Training through Flipped Learning and on-line submission of practical preparation documents. Hennie co-authored a book chapter titled Eating and Drinking in Southern Africa, edited by professor Herbert Meiselman and published by Springer (2020). Hennie holds an advanced diploma from the Cordon Bleu School as well as a two-year Diploma from the Cape Wine Academy. He gained cooking experience at the Michelin-starred Gidleigh Park restaurant in Devon, England, under Shaun Hill; at The Wilds Restaurant in Fulham, London, and worked as restaurant manager at Lucy’s Restaurant in Stanley, Hong Kong. Back in South Africa, he co-owned Sirocco, a restaurant serving Mediterranean food in the Gerhard Moerdyk Village in Sunnyside, as well as Mufuti Restaurant in Riviera, which served modern Pan-African cuisine.

Hennie occasionally writes about food and wine for the Pretoria News and the Sunday Times, writes monthly reviews for the Eat Out Restaurant Guide website and contributes to the annual Eat Out Top 500 Restaurant print guide. Hennie is involved in many community engagement programmes, and has acted as external moderator for tertiary education institutions such as the University of Johannesburg, University of North-West, University of South Africa (UNISA), Steyn’s Culinary Academy, Capital Hotel School, Rietondale High School and the Chaîne des Rôtisseurs. Hennie has served on the Department of Basic Education’s examination panel for Hospitality Studies and as book referee for Hospitality text-books. Hennie belongs to the South African Chefs Association and the South African Association of Family Ecology and Consumer Science, and is a member of the International Association of Consumer Research. Hennie has been invited to serve as a judge at the annual Sunday Times Cookbook Awards as well as at the annual Galliova Awards. Hennie regularly presents at international conferences, most recently at the International Food Studies Conference in Kaohsiung City, Taiwan in October 2019. Hennie has contributed regularly to television cooking shows such as: https://www.youtube.com/watch?v=FmwjxSaR_i0, https://www.youtube.com/watch?v=I0wmETvspE0, https://www.youtube.com/watch?v=lWNUJHzT_Wg. Hennie is an ardent entertainer and home cook, and loves nothing more than to bake and decorate special cakes to help friends and family members celebrate their major milestones.