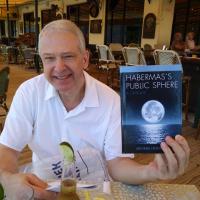 Dr. Michael Hofmann, Professor of Communication and Multimedia Studies at Florida Atlantic University, Boca Raton, is an internationally recognized media and political communication scholar. He was Co-Director of Research on Media Associates (Rome / Berlin / Paris / London), which published The New Television in Europe (John Libbey, 1993) and other empirical research reports. His critical scholarship includes a study on Locke, Koselleck, Habermas, and the Moral Public Sphere. It was published in the renowned Kommunikationswissenschaftliche Bibliothek (von Hase & Koehler, 1988) and lauded at the Premio Europeo Amalfi per la Sociologia e le Scienze Sociali 1989 by an international jury that included Anthony Giddens.

Most recently, he was among the international scholars from twenty countries who were invited to contribute a chapter in Habermas global (Suhrkamp, 2019), the Festschrift commemorating Habermas’s 90th birthday. In 2019, he also published the paperback edition of his comprehensive analysis Habermas’s Public Sphere: A Critique (Fairleigh Dickinson University Press / Rowman & Littlefield, 2017) and his essay “Deliberation in Dysfunctional Democracies: The Global Need for Critically Renewing Habermas’s Public Sphere Concept” in the Journal of Communication and Media Studies. His 2018 article “Habermas’s Public Sphere versus Trump’s Twittersphere: Citizenship in a World of Social Media” in the same academic journal has accumulated 400 plus paid downloads, the most for any single article in the five-year history of this Common Ground Research Networks journal.

His new book, Reading Habermas’s Structural Transformation of the Public Sphere: A Critical Guide, is scheduled for publication by Lexington Books / Rowman & Littlefield in 2021.